Two Deadpan shows on Irish Times’ ‘Best of 2018’ round up

Not one but TWO of our shows have been included in The Irish Times’ ‘best of the year’ round up – Can’t Cope Won’t Cope (Season 2) & Women on the Verge. Thank you for all the love throughout 2018! Loads of fab projects in the pipeline for next year, watch this space 😍

The Year in Review: Young Offenders and Red Rock among our television favourites 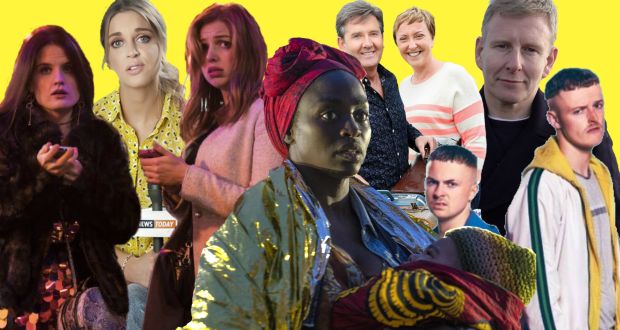 What are you looking at?

It’s a question that’s been keeping television station bosses up at night for another year, receiving reports of an ever-dwindling viewership who find themselves with ever-expanding options on streaming services. And still we had to reckon with an entire calendar year going by with no sign of Game of Thrones. Really, is that any kind of choice at all?

As though hoping to mirror the general uncertainty around terrestrial television itself, perhaps, the accomplished Irish soap opera Red Rock returned at the start of the year to TV3, after a worrisome and abrupt hiatus, with absolutely no security about its future. But Red Rock kept on keeping on, more substantial, pacy and considered than most soaps, and generally too witty for its own good.

If this show really is a metaphor for resilience in times of crisis, there’s some reason to be cheered: at the beginning of the year the show looked dead on arrival; by the end of summer is had been recommissioned, and TV3, technically, was no more, reborn as Virgin Media One. At least people kept watching.

And why shouldn’t they? TV is still a little window into an enormous world, however we choose to look at it. For many people snuggled up at home this is still the most vivid way of seeing how other people snuggle up at home. The most captivating example this year, rising above the armchair voyeurism of property shows, may have been Our Lives in Property: Oxmantown Road, an expansive documentary on the history of a neighbourhood that was uncommonly intimate without seeming invasive.

For those happier to snoop, there were the anthropological exploits of the Big Brother compound, in thankfully its last gasp, or Love Island, still heaving, or Gogglebox sighing, seething or cheering, in mirror image of the viewer.

There were, of course, the RTÉ stalwarts such as Dermot Bannon’s Room to Improve or Daniel and Majella’s B&B Road Trip, or as the product of an RTÉ crossover fever dream Daniel and Majella’s Home Tour: Room to Improve, which thrust them all together to reach the nirvana of light-entertainment programming. In practice, though, the show swerved perilously close to a murder drama. “Now, Dermot, let me take you upstairs for a minute,” Daniel said with silky menace over Bannon’s blueprint, and RTÉ must have worried for one awful moment if he would ever return.

Dramas of a more categorical kind made mixed returns. American Crime Story followed its sensational first series on the OJ Simpson trial with a glossier, slow burn of a series,The Assassination of Gianni Versace. A cleverly crafted account of the fashion designer’s killer, told in reverse chronology, it made for a troublingly glamorous indictment – and celebration – of high style. Westworld returned too, with sprawling narratives, shattered chronologies and episode titles such as The Bicameral Mind, all of which made the show’s philosophies seem only half-baked and your own not nearly baked enough.

If The Handmaid’s Tale was last year’s must-see correspondent to the early flickers of the #MeToo movement and the darkest fears for the Trump era, it seemed to lose its way this year without the benefit of Margaret Atwood’s source novel. Or perhaps it cleaved to images of misery and alarm while real survivors were more conspicuously fighting back. At least the wry sci-fi Legion, as tangled, weird and sensational as Westworld with none of the portent; and The Deuce, a lovingly detailed evocation of the rise of New York’s commercial smut world, both returned with strong series, doubling down on idiosyncratic traits that seemed indifferent to gathering any more watchers. When you’re in, these days, you’re in.

Others, sadly, called it a day. In comedy, we had to see the end of Can’t Cope Won’t Cope, and more specifically the departure of Seána Kerslake and Danielle McGuigan as two young Cork women in Dublin, spinning between ambition and self-destruction like two sides of a co-dependent coin, finally boarding the train back to Mallow. Stephanie Preissner’s zeitgeisty comedy made that seem like the fated fulfilment of its title.

Other female-fronted comedies sprung up later, such as Amy Huberman’s sweet and sour Finding Joy, a much more jagged affair than fans might have expected or necessarily wanted, and Sharon Horgan and Lorna Martin’s Women on the Verge, a sharper comedy of attainment and anxiety. More affectionate, unvarnished and at times downright adorable was the transition of The Young Offenders from big screen to small, where Peter Foott’s hapless Cork teenage delinquents engaged in everything from tuna theft to fridge purchases, treated finally to the most exhilarating bus hijacking since Speed with an altogether more joyous soundtrack. More, please.

It was a year with much to remember; marking the 20th anniversary of the Belfast Agreement in compelling, personal documentaries such as Patrick Kielty’s My Dad, the Peace Deal and Me, the vivid career retrospective John Hume in America and a rare glimpse of both the tension and tedium of British army deployment in Northern Ireland, Squaddies on the Frontline. It was also 100 years since the end of the first World War, marked in various ways on screen, and the outbreak of the considerably more lethal Spanish Flu, given a nerve-fraying BBC documentary.

A century after women got the vote, and after a year of the renewed feminist verve of Me Too, television was a lively venue for programmes of illumination, debate and discussion on gender politics, from programmes that tackled problems head on, such as Anne Roper’s No Country for Women and Tanya Sillem’s A Woman’s World, both on RTÉ, to documentaries with similar concerns stitched into their fabric, such as a superb RTÉ programme devoted to the poet Eavan Boland, Is it Still the Same?, and the BBC’s deeply harrowing Manchester: The Night of the Bomb, which still served as remarkable testament to the unbreakable spirits of female youth.

We also watched as history was made, rising above the noisy debates around the referendum to repeal the Eighth Amendment, or to elect a president, to see in their results a country still committed to justice and equality. Is it any wonder, then, that Taken Down, a drama set among the Stygian gloom of direct provision, or Whistleblower, an exhaustive account of the alarming trials of retired garda Maurice McCabe, should have attracted so many viewers? At such moments this year, it was still possible to imagine a country, broadly united for all its divisions, somehow choosing to look at the same thing at the same time.